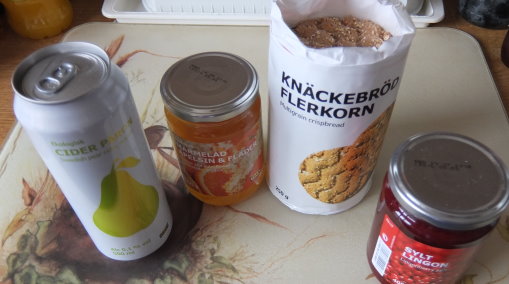 Based on the observation that the IKEA multigrain crispbreads are similar in taste and texture to bran cereals, I decided to try to make an adapted version of this recipe from them. So the ingredients would be: 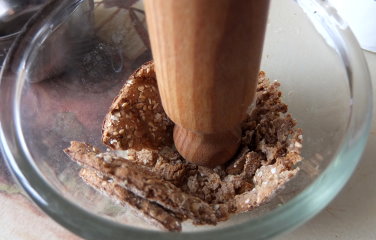 I started with a cupful of crispbreads, crushed with the end of a rolling pin - it turned out that six of the crackers make up a cup. 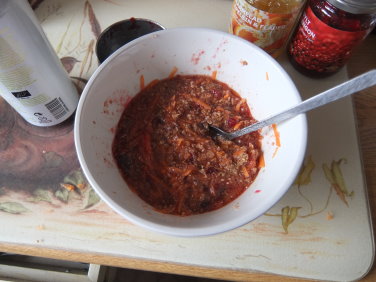 I added half a cup each of lingonberry jam and marmalade, a cupful of grated carrot and a cup of pear cider.

I covered this with plastic film and left it in the fridge overnight. 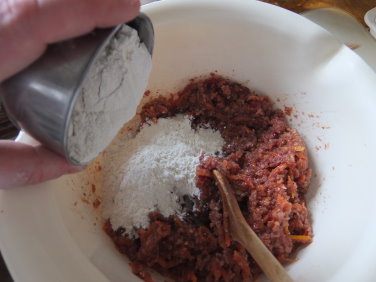 Next morning, I added a cupful of SR flour and mixed it in thoroughly.

Then I added half a cup of blueberry jam and folded it through the mixture.

The theory here was that the jam would replace both the fruit and sugar in the recipe from which this was adapted. 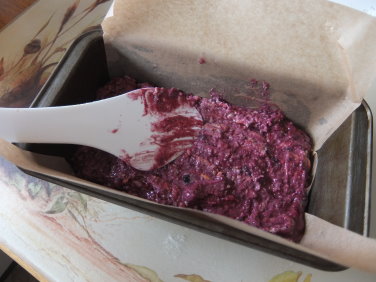 I put the mixture in a lined loaf tin and baked it in the oven at 200C for 40 minutes. 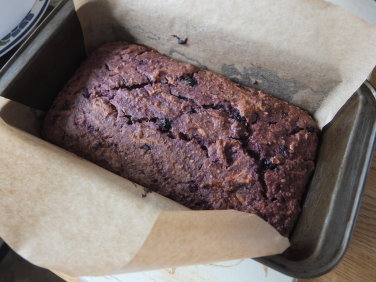 When it emerged from the oven, it looked quite promising - it had risen to twice the original volume and the top had cracked and crisped.

However, when it cooled, the loaf sank back down again - and when sliced, it was very sticky and doughy inside - this in spite of being tested at the end of baking by poking it with a cocktail stick (which came out clean). 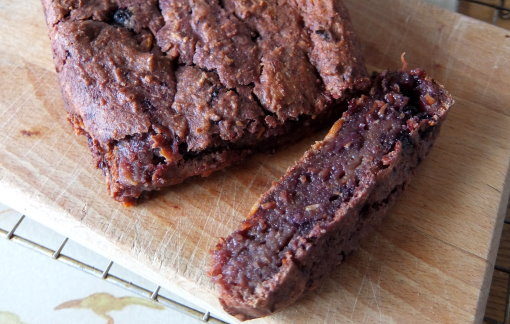 I think the problem here was just too much moisture from the jam (the original recipe used dried fruit, which soaks up the added liquid.  I suspect this recipe could be made right by simply doubling the quantity of the multigrain crispbreads. 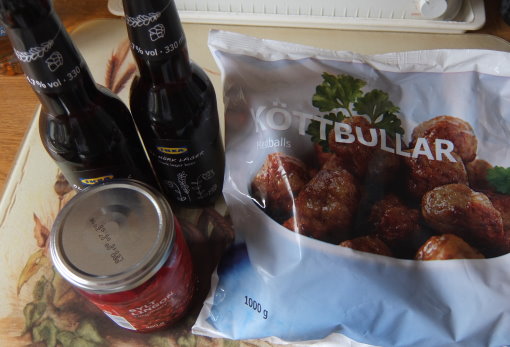 The ingredients for this one are simple: 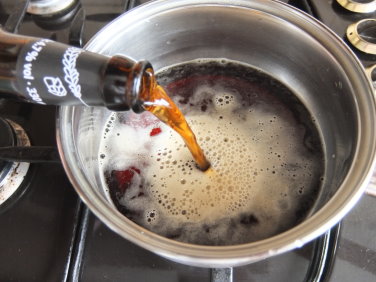 I started with two bottles of dark lager - I put these in a pan and brought to the boil, then simmered until reduced down to maybe one tenth of its original volume.

A little care is needed here, as the fizziness of the beer makes it very likely to boil over when initially heated - but once first boiled, this problem goes away. 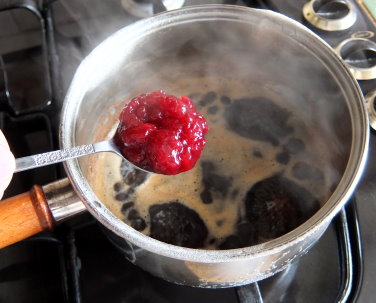 I added about three tablespoons of lingonberry jam and simmered further until the mixture was conspicuously syrupy.

Then I took it off the heat and allowed to cool for a little while. 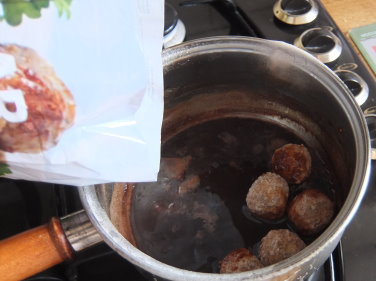 I added some meatballs directly to the pan - because they were still frozen, they easily picked up a coating of the syrup.

I put them in a metal tray, covered with the rest of the syrup and put this in the oven (170C) for 25 minutes.

While this was cooking, I boiled some potatoes to accompany my meatball lunch. 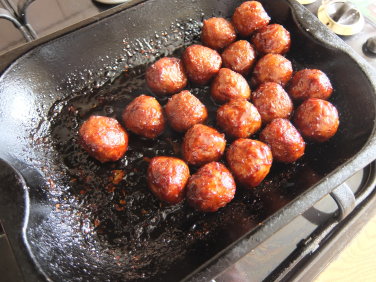 Every 5 or 6 minutes, I took the tray out of the oven and gave it a little jiggle so that the meatballs would pick up a fresh coating of the sauce.

At the end of the cooking time, the sauce had reduced to a sticky syrup, thickly coating the meatballs.

I mashed the potatoes with lots of butter, pepper and snipped chives.

Served with a generous spoonful of lingonberry jam, the dish looks utterly fantastic: 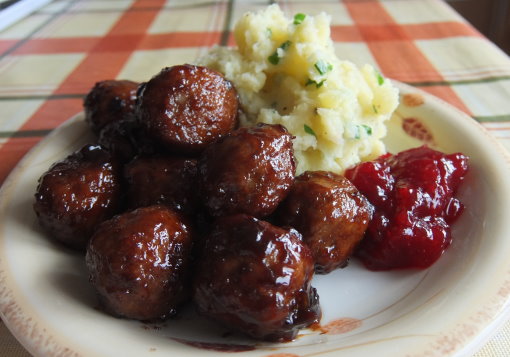 Taken together (that is, a meatball, a little potato and a dab of jam all on the same forkful), this was a good combination - the sweetness of the jam and the buttery creaminess of the potatoes perfectly balances the malty bitterness of the sticky beer glaze, but eating the meatballs on their own was less than perfect - the beer adds just a little too much bitterness to the flavour.  Still a worthwhile experiment I think.

One bottle of beer instead of two, more jam (and thus reduced a little less) would probably make this a complete success. 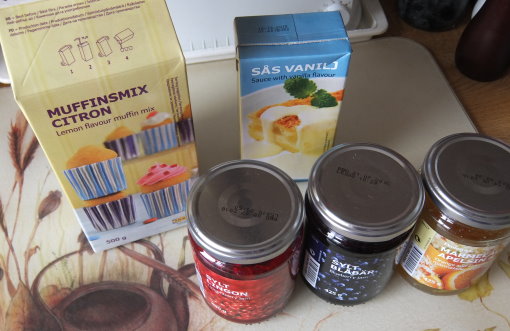 Now for dessert - and this should be easy; an upside-down cake topped with three different jams/preserves.  So we're using: 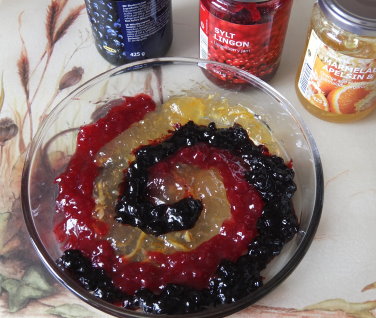 I began by making a careful spiral of each of the preserves in the bottom of an ovenproof dish - the notion being that this pattern would at least somewhat persist into the finished cake. 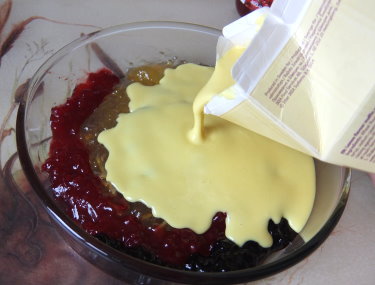 The muffin mix is surprisingly fluid when mixed, so I had to pour it very slowly into the dish to avoid disturbing the jam.

I baked the cake in the oven at 200C for 35 minutes (longer than specified on the pack, but it's a larger cake - individual cupcakes would cook quicker. 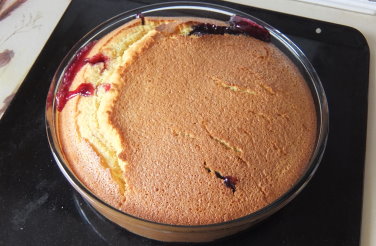 It rose beautifully and I made the stupid mistake of assuming that it was fully cooked.  I should have tested it with a wooden stick.

Unfortunately, when I went to turn out the cake, it was undercooked in the very middle (no picture of this). 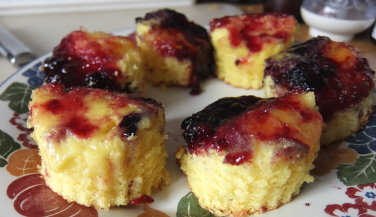 Thinking fast, I rescued the cooked part of the cake by cutting circles out with a scone cutter - I got six intact serving-sized pieces.

Obviously not as pretty as I had planned, but more or less presentable.

However, if I was doing this again, I'd perhaps just bake it in individual ramekins. 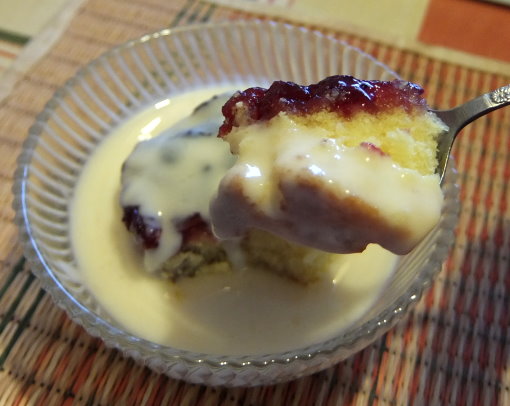 This is tougher than I thought - not so much because of the limited range of components, but because it takes time and practice to learn the properties of each of the ingredients when they are used outside of their normal scope.

I think I'll probably put this idea to bed, for now; maybe I'll have another go if and when the range changes a little and new possibilities are presented.