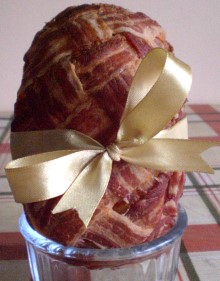 Dear Internet - I heard you like bacon, so I made this for you.

Yes folks - it's an Easter egg made of bacon! 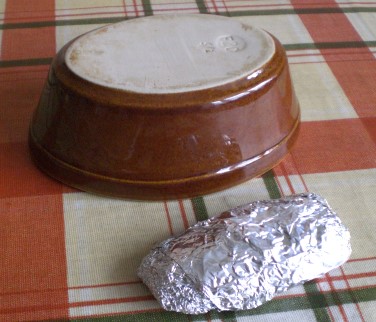 I hunted high and low for a metal egg-shaped form, without success, so I had to improvise.

I took an ovenproof stoneware oval pie dish and made a domed pad for the top, from aluminium foil. I then covered this with an additional later of foil which I tucked around the lip of the dish. 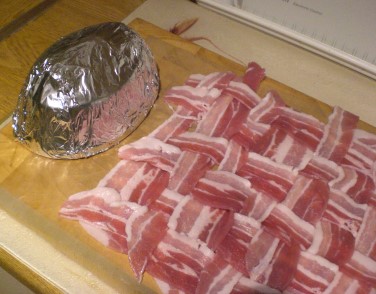 Bacon weaving is not a new idea, so I won't pretend to have invented it - I wove a tight mesh of streaky bacon on top of a flexible baking mat (makes it easier to handle once made).

Bacon weaving is pretty easy - just lay some rashers out in parallel formation, then add others going alternately over and under the first strips. 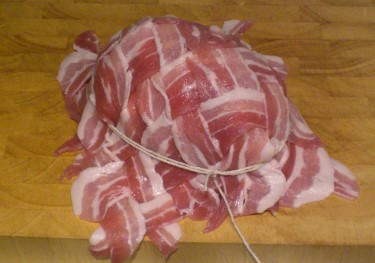 I draped the bacon weave over the egg form and tied it around the bottom with cotton string.

After taking this picture, I tucked the spare ends of bacon underneath and placed it on a metal baking tray and baked in the oven at 170C for half an hour. 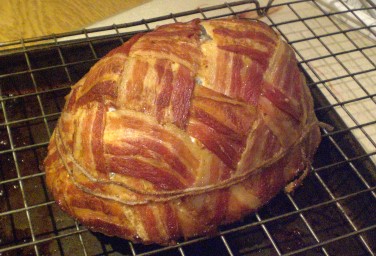 The bacon shrank a little during cooking, opening up a few small gaps in the lattice, but this isn't a big problem.

I placed it on a wire rack to cool. 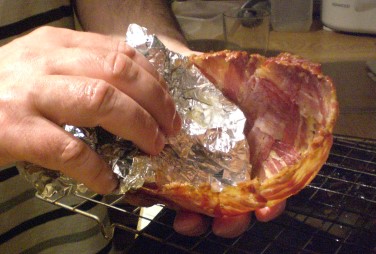 Once cooled, I trimmed off the spare fringes of bacon (it just snapped off), then pulled the foil away from the oval dish.

The foil came away cleanly and easily from the inside of the bacon-egg shell. 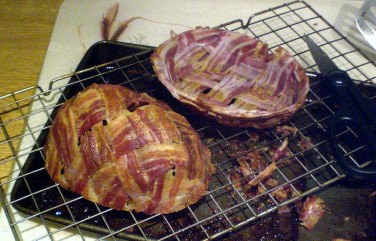 I made the other half of the bacon-egg in the same way, except without the domed foil insert - because I want the egg to be able to lie flat on a plate.

I trimmed up the edge of both halves with kitchen shears. 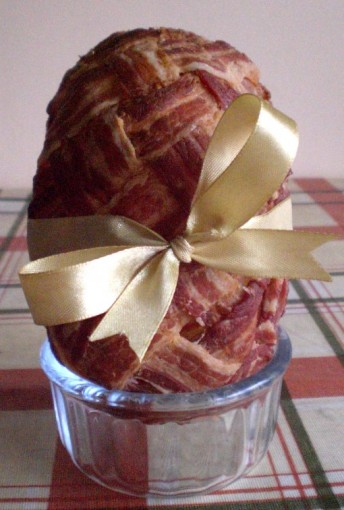 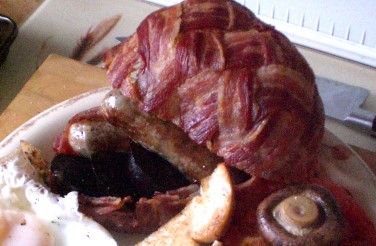 The next morning, I reheated the bacon-egg shell in the oven (which also gave it a final crispness.

Then I used it as the centrepiece of a full English Breakfast.

The egg conceals a couple of nice Cumberland sausages and some fried slices of black pudding - also on the plate; fried tomato, mushroom, potato slices, fried bread, baked beans and a fried egg (cooked to perfection with a liquid yolk) - and a nice mug of tea on the side. 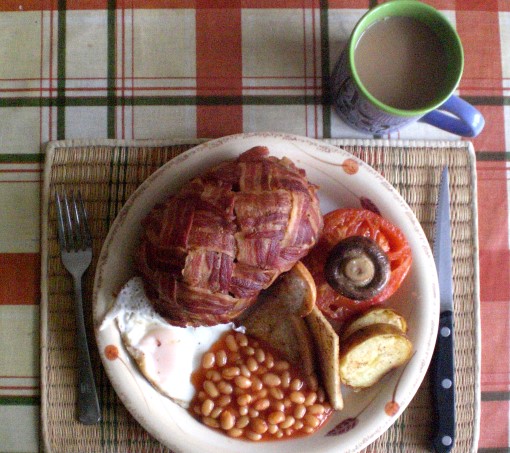 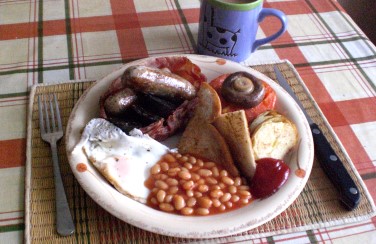 In practice, that was too much bacon even for me, so the top half was set aside for sandwiches later.

What Is A Full English?

Not everyone agrees on what a full English breakfast comprises - here are a few of the things I consider essential...

Perhaps the most controversial item on the list - Black pudding - a sausage made from cereals, pork fat and pig blood. Yes - it sounds icky to some, but it's really delicious, and honestly, eating this part of an animal isn't such a big deal, if you already don't mind eating other bits. 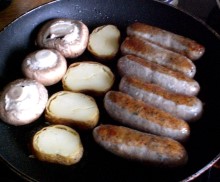 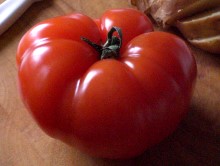 Sliced through the equator and fried, cut-side down first (to seal it) then flipped over and fried on the skin side until it bubbles and steams - round tomatoes are a more traditional inclusion, but this beautiful, delicious beef tomato caught my eye and I had to have it.

Some people prefer canned peeled plum tomatoes, warmed in their juice - and these are nice, but for me, a fried tomato is the winner.

Yes...yes we DO like bacon for we are legion and enjoy the meaty crunch of bacon immensely... we can't wait to get our forks around one of these gorgeous baconeggs (2 for the price of 1!) and the hidden chippolatas make all the difference and elevate t

That looks so good. I was in Poland last week and it was my strictly veggie host's 50th. I foolishly said what would you like? And he said you go vegetarian for a month or pay

What did you mean when you wrote 'that was too much bacon'??Love this idea. You are a bacon hero!;