Fairy Ring Mushrooms were probably the first wild fungus I learned to reliably identify. I've known for many years that they are edible, but never quite got around to trying them, until now.

At Last! Some Wild Mushrooms

This year, 2008, has been a little disappointing for wild fungi so far - with quite a few trips out to promising locations leaving us to return home empty-handed, or at least without the mushrooms we went for. 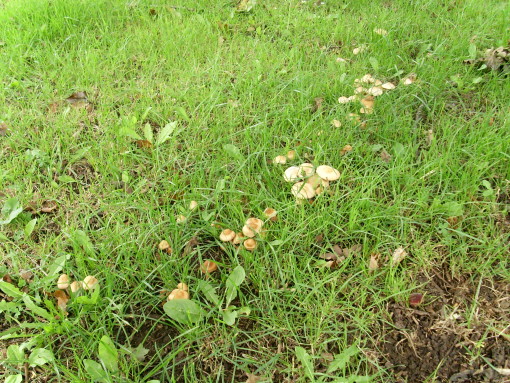 What Are Fairy Ring Mushrooms?

Marasmius oreades - these rather charming, unassuming little fungi are very common in lawns and other grassed areas such as parks and playing fields. - They typically grow in circular rings - starting as a single clump and widening a little each year as the underground mycelia spread out in search of new resources.

The place where they grow can often be identified even in the complete absence of the fungal fruiting bodies, by a ring of darker, taller, thicker-growing grass. It's not uncommon for these ring formations to become interrupted or irregular in shape due to a wide range of environmental factors. 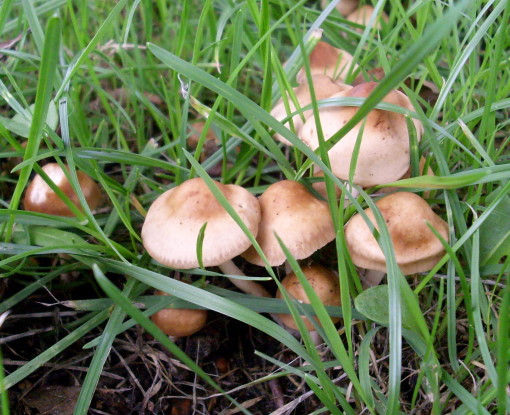 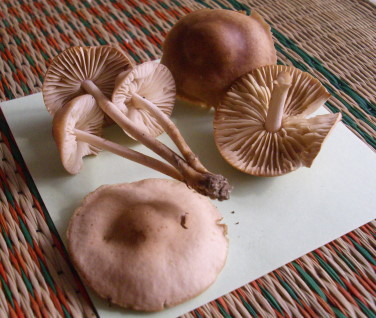 The mushrooms appear in circles, lines or arcs amongst grass - with no particular association to any tree. The caps are pale buff when young, about a centimetre across and smoothly conical or hemispherical, they grow to perhaps 5cm in diameter, darkening, especially at the centre, to nut brown.

There is often a pronounced bulge in the centre of the cap (called an umbo). The gills are also pale buff, quite sparse and fragile and sometimes irregular.

The stems, again pale buff in colour, are very tough and fibrous and are difficult to break by hand or remove from the cap without tearing it. 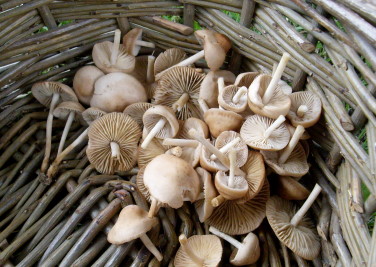 Wild mushrooms are best gathered in a flat, open container such as a basket or tray - a plastic bag will only really suffice for the briefest journey home, when no other option is available - more than half an hour and they start to 'sweat' and may no longer be usable.

My preference, when picking wild fungi, is always to cut off the base of the stems, to prevent any adhering earth or other debris from being shaken into the spaces between the gills.

An ounce of prevention is worth a pound of cure here - trying to clean lots of sand and dirt out of your mushrooms is hard work, and not often entirely successful.

These mushrooms apparently dry very well if they're just threaded onto cotton and hung up somewhere airy - and they rehydrate well too - in fact, in the wild, they are able to dry out completely in times of drought, then when it rains, they not only soften and become moist again, they will actually come back to life. 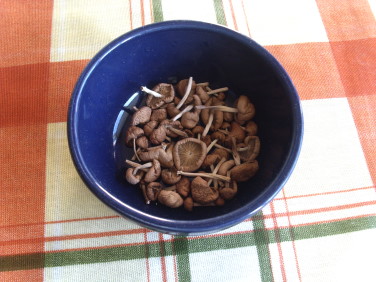 They are really easy to dry - I just picked these and left them in an open dish in an airy place - a couple of days later, they had dried to brittle, corky little things - with an intense mushroom aroma not unlike ceps.

I'm going to use these in a risotto

The stalks of this species are as tough as old boots - not really suitable for the table (although they would make a good addition to a stockpot.) So I pulled them all off - in most cases, this causes the cap to break into pieces, but that doesn't really matter.

I used a pair of pointed scissors to snip out the stalks from the younger, smaller specimens and a small paintbrush to remove any flecks of dirt or debris from between the gills. 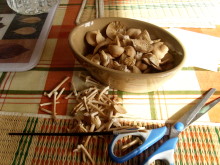 I always think that the best way to enjoy wild mushrooms, if trying a species for the first time, is to simply sautee gently in a little butter. I broke up some of the larger caps so all the pieces were approximately the same size. 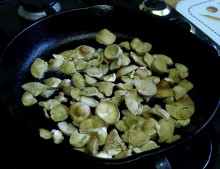 They shrink down quite considerably during cooking, so there was really only a little taste for each of us - so I used it as a garnish for a meal of macaroni cheese

Wow! They may be small, but they really pack in the flavour - I've heard these mushrooms described as earthy or dull, but they're not - they actually have quite an intense classic mushroom flavour - they'd be great in a soup or risotto.