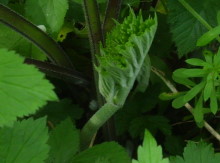 3 May 2009 - Several times in the past I've intended to try eating hogweed, but have arrived too late to get the tender young emerging shoots - this time, I got the timing exactly right.

Heracleum sphondylium - This is a tough, bristly umbellifer that is very frequently found in hedgerows, field edges and on river banks. It has very large leaves (above) that start off deep green and felty, but gradually toughen to something that has the look and feel of dark olive green sandpaper. 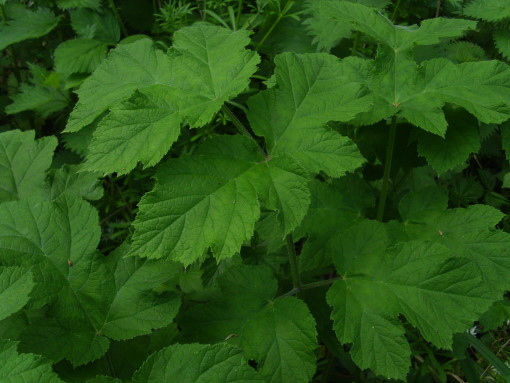 This coarseness of nature might make it sound quite unsuitable for the table, but in fact, it's a really excellent vegetable. 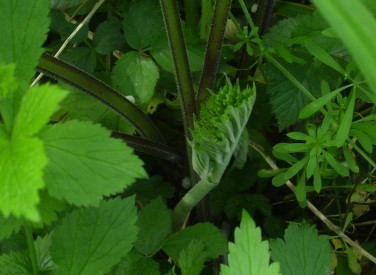 The bit to look for is the young leaves and stems, just as they are unfurling.

At this stage, they are easy to cut or pick, although rummaging down through the middle of the older, more bristly leaves can be a bit uncomfortable. 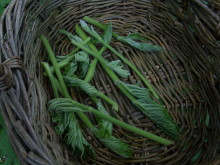 It didn't take me long to gather a dozen nice young shoots.

Steamed and dressed, it can be served in similar fashion to asparagus.

I think it would also work well with a white sauce - maybe as a filling for savoury pancakes.

I steamed them for about 8 minutes, then dressed them with a little butter, pepper and lemon juice.

After cooking, the shoots are meltingly tender and have a sweetish, mild taste - faintly reminiscent of parsley. The bristles soften, but don't go completely away, lending an interesting texture - soft and tender, but oddly crisp at the same time. 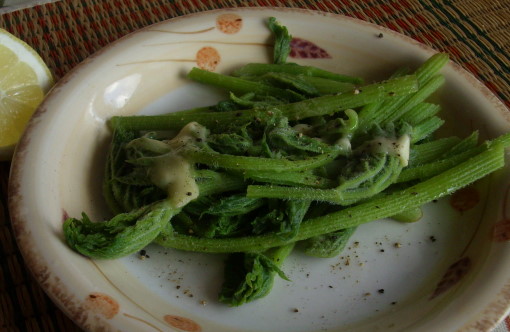 Hogweed is a pretty easy plant to identify - but there are other members of the umbellifer family that are not good to eat - most notably, Hemlock - which isn't really similar at all, but worth mentioning, I suppose.

There's hogweed, and there's giant hogweed - they are similar in appearance in that they follow the typical umbellifer style of growth - a clump of foliage, from which emerge a number of erect stems topped with flat umbels of flowers.

But they are different in a number of ways - most importantly, giant hogweed is phototoxic - get any part of the plant on your skin and it will render it extremely sensitive to sunlight, resulting in painful and dangerous burns to the exposed area.

Fortunately, they're easy to tell apart - giant hogweed is, as the name suggests, a very much larger and more robust plant - easily growing to 3 metres tall or more, and it has leaves that are more glossy and deeply cut - almost spiky and thistle-like in appearance.

Might it be worth pointing out how to tell the difference between this and giant hogweed whose sap is phototoxic and causes blisters and scarring in the presence of sunlight? (definitely not to be gotten in the eyes!)

It's also worth pointing out that it's risky eating plants from the umbellifer family like hogweed unless you're utterly sure you've identified the right plant. Some other plants in the family, such as hemlock, are extremley poisonous.