The Joy Of Socks - Wearing Odd Socks On Purpose 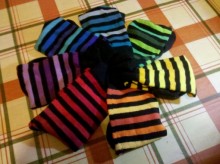 These socks are fun. Wearing odd pairs of them is silly and fun - it's like being extrovert in secret. So can we make it sillier, or more fun?

A Rainbow Of Possibilities 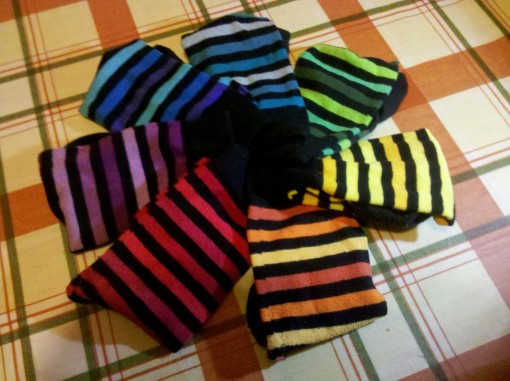 The Naming Of Things

Seven different colours of sock - by my count, that means there are 21 unique pair combinations (not including same-colour pairs, obviously, or 42 combinations, if left and right is critical, but I think in most cases, it won't be...)

The task is simple: let's see if we can come up with a name for each of these colour combos. 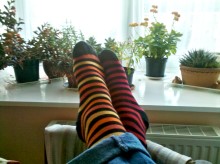 Red And Orange - Dennis The Tigger

Dennis The Menace has a black and red striped jersey. Tigger is orange-black striped. Simple. 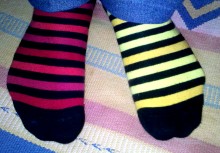 Red And Yellow - Rhubarb And Custard

Red on the port side, green starboard - just like the navigation lights on a boat. I suppose the opposite way around would be called 'Distress Signal' or 'Going The Wrong Way'. 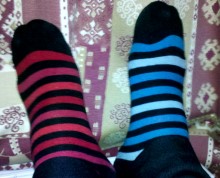 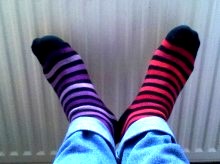 Red And Violet - Fruits Of The Forest 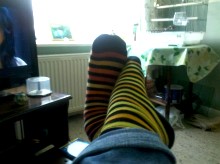 '"Oranges and Lemons" - say the bells of St Clements' 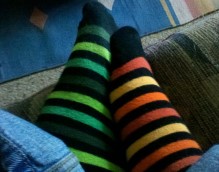 Orange And Blue - Fire And Ice 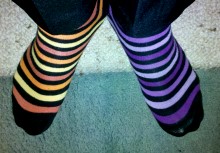 Orange And Violet - This Is Hallowe'en

Orange pumpkins and purple... well, in truth, I don't really know why purple is also associated with Hallowe'en - it's part of a triad on a colour wheel along with orange - which is why it they look nice together.

Cheese and Onion crisps should come in green and yellow packets - some brands may try to insist the packet should be blue - but that's just wrong.

Or Lemon and Lime.

Yellow And blue - Sun and Moon 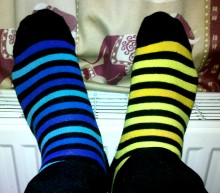 Yellow for the sun, in the purest of azure skies. High Noon. Draw! 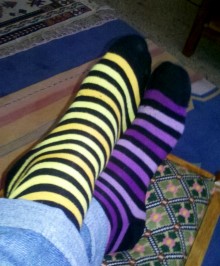 Yellow And Violet - Jam And Wasps 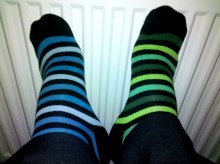 Green And Blue - Under The Sea 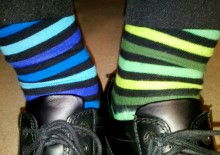 Green And Indigo - Earth And Ocean 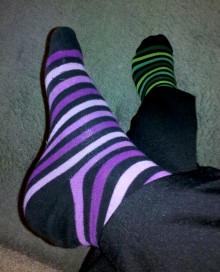 Green And Violet - Blackberry And Apple

Why do socks keep making me think of food? Or am I just thinking about food all the time...? 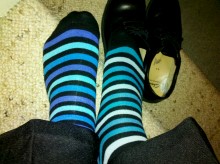 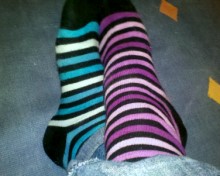 For a couple of years now, I've been wearing deliberately odd socks every day - it all started one winter morning, when I got up early and dressed in the dark - only later discovering that one sock was black with a blue toe and heel, and the other was black with a grey toe and heel.

In my defence, everything looks blue in the dark (no, really - it's called the Purkinje effect - look it up!)

Anyway, that started me off on the odd sock path, but with my shoes on, nobody could tell, as all my socks were black, only varying in colour at the toe and heel sections - but that was good - the justaposition of being silly, but nobody noticing was in fact quite pleasing.

Nothing lasts forever though - and so when the time came to buy some new socks, I found (at Sainsbury's) some packs of striped ones in seven different colours - and couldn't resist.

Only One Of Them Is Odd

Obviously, I'm only wearing one odd sock - the other one isn't odd.