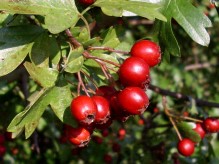 Crataegus spp - also known as May or Mayflower (because the white and pink flowers typically appear in early May and persist about a month). This is a common deciduous tree, often the chief species in planted hedges. It bears fruit in late summer to autumn and the berry-like 'haws' (which are actually not berries, but pome fruits, like apples and pears) may still be found on the trees right through the winter - or at least until the birds eat them. 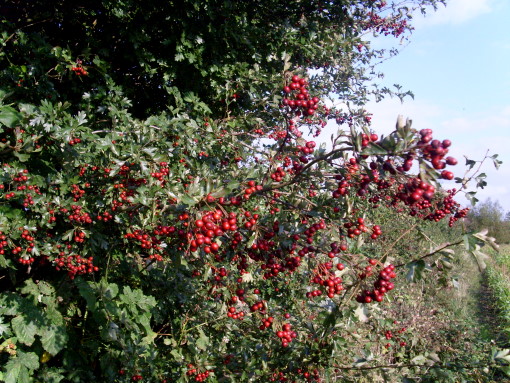 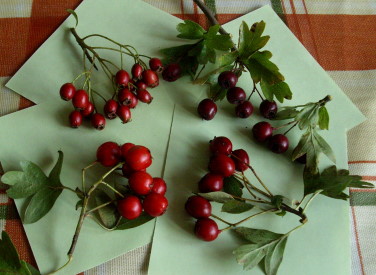 The haws are considerably variable from one tree to the next - perhaps depending on a combination of microclimate and genetics - some plants produce small, hard, dry fruits, others bear great clusters of fat, mealy ones.

It's well worth spending a little time and effort looking for the plants with the big haws - as these have a vastly greater flesh-to-seed ratio. 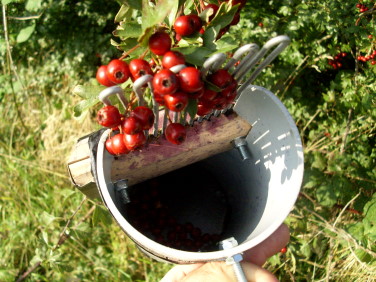 I used my home-made berry picker to speed up the process of gathering the fruits.

It doesn't work as well for Hawthorn as it did for Bilberries, but it's still a big improvement over picking by hand - if for no other reason than it leaves one hand free to keep the thorny branches under control.

Like Rowan, Hawthorn is very common, yet frequently ignored as a food source - perhaps because, like Rowan, 'wild berries' are generally considered poisonous by default.

Hawthorn fruits can in fact be eaten raw - I've tried nibbling on some of the fatter ones - they taste a bit like a very mealy, over-ripe apple. 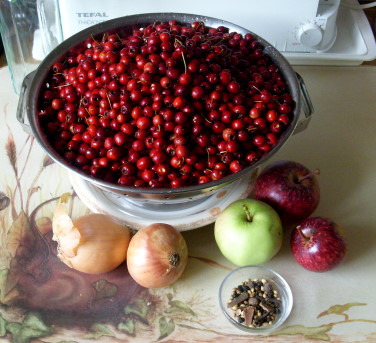 I started with a generous colander-full of haws, a couple of apples and onions and about a tablespoonful of mixed whole picking spices (includes cloves, cinnamon, allspice, coriander, cumin and cardamom)

I removed most of the foreign debris from the berrries - all of the leaves and spiders plus most of the stalks, but scrupulous picking-over isn't necessary, as it will all be sieved later. 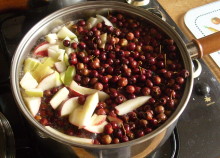 I put all of this into my biggest saucepan and added just enough water to cover, then brought it to the boil and simmered until the haws were completely tender and breaking apart.

Then I pounded the contents of the pan with a potato masher for a while. 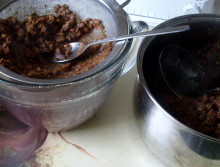 Next, I forced the cooked mixture through a tough, fine sieve using the back of a spoon - this was quite hard work and I'm sure would be more productive using a mouli or something like that. 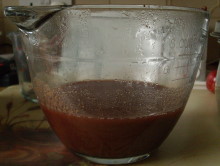 I was left with a couple of pints of juicy pulp - at this point, I gave it a little taste - big mistake - it was really, really unpleasantly bitter.

I put the pulp back in the (rinsed) pan, adding (for each pint of pulp) a quarter pint of distilled malt vinegar, three ounces of soft dark brown sugar and about a quarter teaspoon each of ground allspice and cayenne pepper

Then I poured it into sterilised sauce bottles and capped them tightly while still hot. 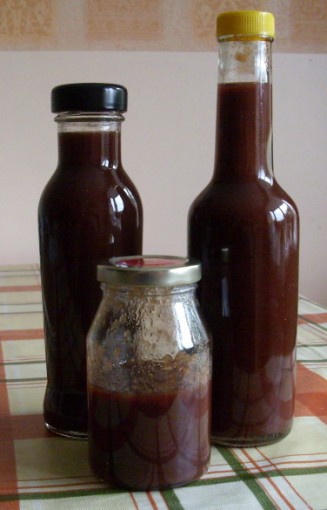 The first taste of the sauce (the part-bottle, the next day) was a big disappointment, as it still had a very bitter tang which overwhelmed all the other flavours - I put the two full bottles in disgrace at the back of the cupboard.

After a month, I thought I'd give it another try. What a difference!

The sauce has mellowed into a fruity, piquant brown ketchup - bitterness has subsided to a level that is actually pleasant and the sauce now makes an excellent accompaniment to almost any savoury dish.

I should have known this, of course - leaving pickles and chutneys to mellow and mature is not at all unusual - but this is the first time I've known it to eliminate bitterness like that.