PRANG! started out life as a joke - in one of my scambaiting videos, a scammer accused me of 'playing prang of the transaction' (I think they meant 'playing pranks') - In my video, I turned this into a little mockup of an 8 bit video game; you can see that at around the 2:40 timestamp in this video:

Much, much later, it occurred to me that I could make PRANG! into a real game - and here it is!

None of this would have been possible without the coding skills of GameGeek3 on Fiverr.com, who coded this game from my sketchy design and game rules.

The music for the game comes from the album Dunes At Night from OZZED.net, comprising:the three tracks: Secret Treehouse, A Calmer Day and Boink - the composer also has a YouTube channel here.

Click the big ol' button below to open PRANG! in a new tab or window

Instructions are inside the game, but in a nutshell:

You're PRANG (a yellow octopus thing).  Click or tap somewhere on the screen to make PRANG go there in a straight line

As the game progresses, obstacles get more numerous, as do enemies, who get faster; food gets more scarce

There is a range of PRANG! merchandise available on myTeespring Store 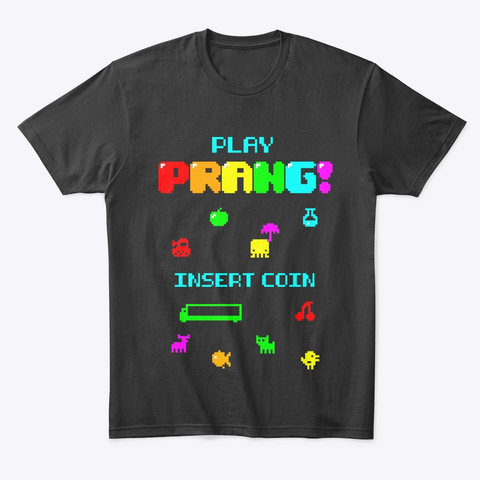 Want to make your own version or implementation of PRANG!?  You Can!

PRANG! by Atomic Shrimp is licensed under a Creative Commons Attribution-ShareAlike 4.0 International License.
Based on a work at http://www.ozzed.net.

You are free to remix, adapt and reuse this game - do what you like with it - for free or for profit, but please recognise and attribute the people who have already worked on this (see credits section above), and share what you create freely.

Hey there, I'm Alejandro Zamora, the Community Manager over at simmer.io. I love watching your videos and I didn't think you were going to make Prang a real thing, it's awesome. It's simple, yet challenging. The art isn't the best, but it is great. The game itself is actually pretty fun, although it could use some more content in my opinion.

Anyways, I was wondering if you'd be willing to put the game on simmer.io. You can upload it via "iframe" which basically emulates your game on simmer. It's really simple to upload and with over 10,000 developers on Unity, you could get much more feedback on the game.

If you decide to put in on simmer.io or not is entirely up to you, but I think it would be pretty cool.