This is possibly the simplest pattern of all - consisting of only two move groups - it produces a soft, slightly rounded braid with diagonal markings - it has a ‘good’ front side and the back is different (less decorative) 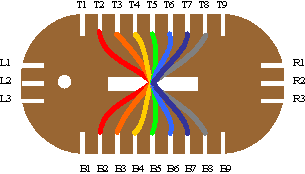 Bring the rightmost threads to left
Move:
T8 to B1
B8 to T1