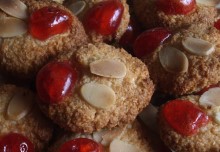 These sweet little macaroons are deliciously nutty and chewy - the perfect accompaniment to a mid-morning coffee.

This recipe is gluten free.

Separate the whites of two eggs

If you don't have an egg separator, do this by carefully cracking the shell in two, then passing the yolk back and forth between the two shell halves, spilling the egg white into a bowl below, taking great care not to puncture the yolk. 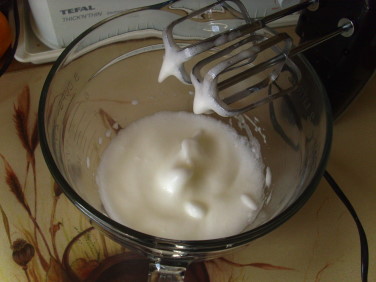 Keep the yolks covered up in the fridge - we'll think of a use for those later...

Whisk the yolks until they are loosely frothy - we're not making meringues - the objective here is just to break up the stringy nature of the whites so they mix in evenly. 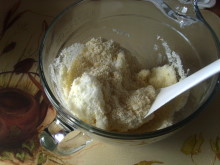 Mix all of the other ingredients (except the cherries and flaked almonds) together in a separate bowl, then mix them into the egg white.

There's no need to fold in carefully - the bubbles in the egg white are not meant to be retained in the mixture, in this particular recipe. 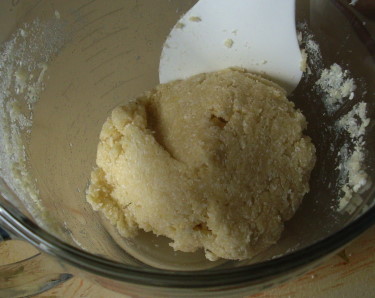 The mixture should come together into a ball of soft, slightly sticky dough. 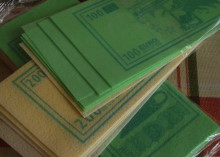 Macaroons are traditionally baked onto rice paper (which is usually not in fact made from rice at all).

I had quite some difficulty tracking down a supply of rice paper, but eventually found 'funny money' in a sweet shop - it's coloured rice paper printed to resemble money - and will do just fine. 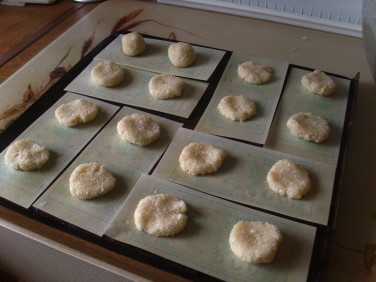 Spread out the rice paper on a baking tray and place balls of the mixture on top.

They will only spread a little when baked, so you can make them bigger if you have bigger pieces of rice paper.

Bake in the oven for ten minutes or until nicely browned. 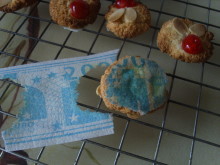 Remove from the oven and allow to cool for a few minutes.

When cool to the touch, tear off the spare rice paper from the edges of the macaroons.

If you don't like coconut, you can just use more ground almonds, or substitiute ground rice or semolina instead (the latter of which is of course not gluten free).

Vanilla extract may be added in place of (or in addition to) the almond essence. 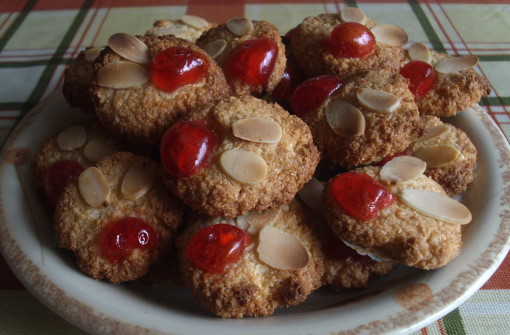 If you don't have rice paper, the macaroons can be baked on a silicone baking sheet - the combination of egg and sugar in this recipe makes them very sticky whilst cooking - they might be OK straight on a non-stick cookie sheet if it's fairly new and the non-stick coating is in good condition.