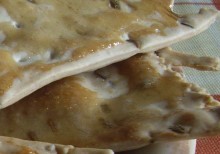 If you've got a pasta machine, did you know it can do other things besides making pasta?

Here's one of them - you can make these sweet glazed crackers 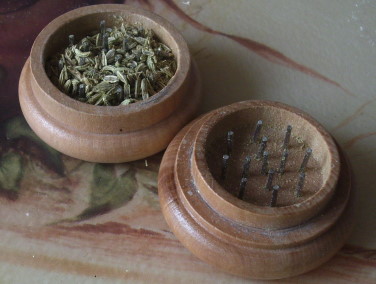 Crush the fennel seeds - either in a little hand mill like this one, or with a pestle and mortar, or chop them on a strong cutting board by rocking a large knife back and forth over them

Put all of the cracker ingredients, except the water, into a large bowl and cut them together with a table knife 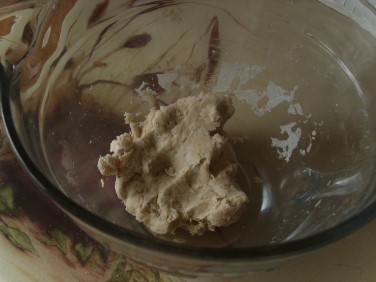 Add the water a bit at a time, until the mixture is just moist enough to form a stiff dough 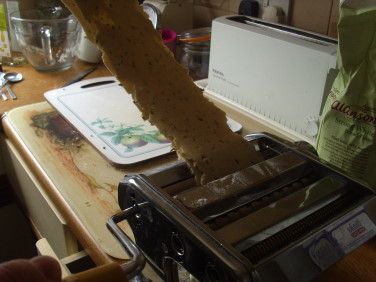 Run the dough through your pasta machine repeatedly, folding in half each time

The procedure is exactly the same as for pasta, except stopping at about number four - or halfway on the thickeness guage 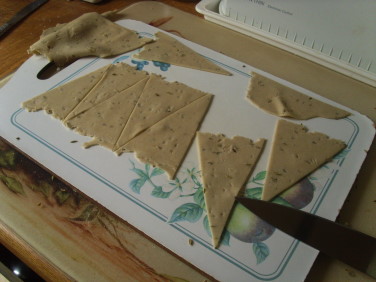 Cut the rolled dough into whatever shapes you like

I chose triangles because there's no leftover dough to re-roll, and also, they tessellate well on the baking tray 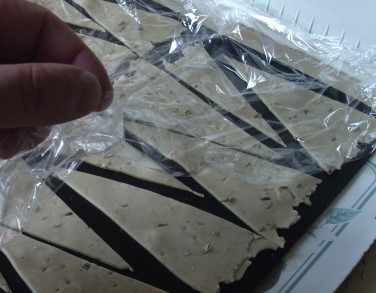 Leave in a warm place for half an hour at least.

There will be little evidence of rising before baking, but letting them rest for this time does make a difference

Toward the end of the rest time, preheat your oven to 150 C 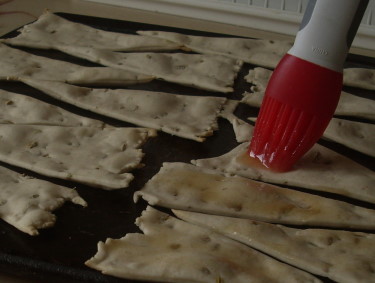 Bake in the oven for five minutes only.

While they bake, mix together the honey and sugar - warm it a bit in the microwave or oven if it's not runny.

Remove the crackers from the oven - they should be puffy, but not really browned. Brush them with the glaze and return to the oven for another five minutes 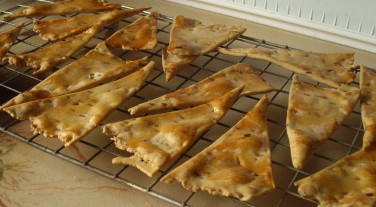 Be careful when they are hot, because that glaze is melted sugar, which sticks to skin and is hotter than boiling water 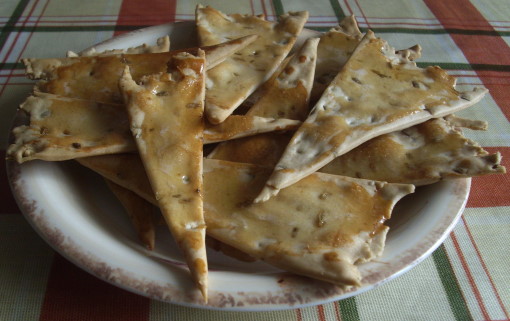 These honey-glazed crackers go really well with cheese - particularly salty, crumbly white cheeses. If you've never tried honey and cheese before, and think the idea is a bit strange - give it a go - trust me, it's good 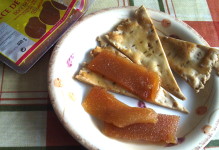 Alternatively, they work just as well with sweet preserves - I ate some of mine with thin slices of dulce de membrillo - a kind of firm, jelly-like quince preserve from Spain

Black pepper or other spices could be incorporated into the dough

Instead of the sweet glaze, they could be brushed with an egg wash and sprinkled with coarse salt, for a pretzel-like finish