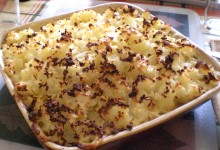 Fish Pie is a classic British dish - but some examples of it will have you hunting for traces of the main ingredient.

This one is designed as the antidote to mediocre fish pie - so it's crammed with four different kinds of fish, and lots of it - I'm calling it Fiercely Fishy Pie.

Makes a large pie that will easily stretch to feeding 6 people, or provide very hearty portions for 4. 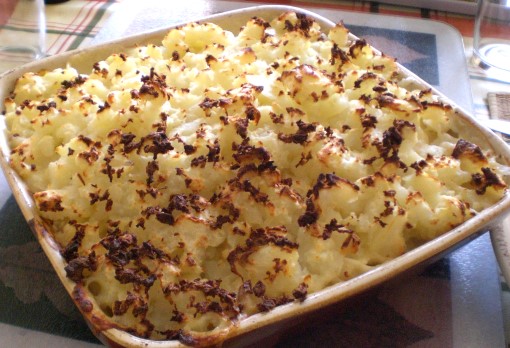 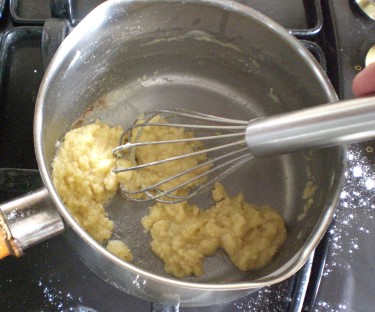 Melt the butter in a small pan over very gentle heat. Add the flour.

Stir together with a small balloon whisk and turn up the heat a bit.

The mixture will form a soft paste (called a roux) - let this sizzle gently for a minute or two, stirring all the time with the whisk. 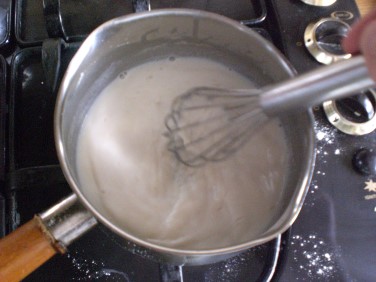 Add half the milk and whisk vigorously.

You may need to reduce the heat a little here to remain in control - keep whisking until the lumps of roux are all dissolved into the sauce, then add the other half of the milk.

Raise the heat a bit and keep whisking for a few minutes - the sauce will thicken to a creamy consistency.

This sauce is called Béchamel and is a basic recipe that can be adapted in many different ways.

Now is a good time to add herbs or spices (I used a few strands of saffron). 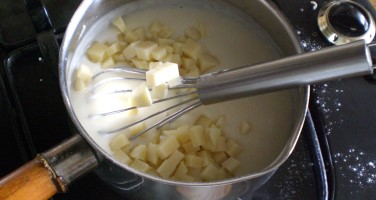 Cut the cheese into very small cubes, or grate it. Add this to the sauce.

Stir with the whisk over a gentle heat until no lumps of cheese are visible.

Take care to scrape the whisk right around the bottom and corners of the pan, to prevent the sauce from burning on the bottom. 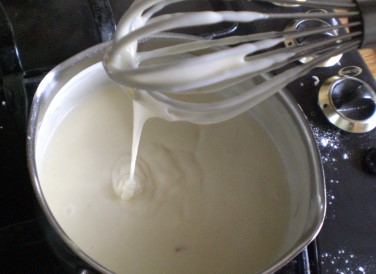 Take the sauce off the heat and set aside.

It should be a thick, but pourable consistency at this stage.

Don't worry if it seems a bit thin - it will thicken further while you prepare the other ingredients. 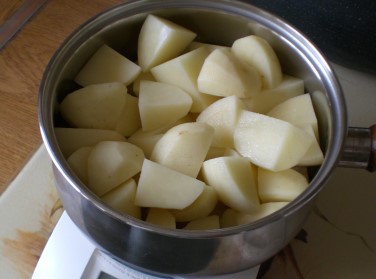 Peel the potatoes and cut them up - they will cook more quickly and evenly if cut into small pieces, and as they will be mashed later, the size or shape of the pieces doesn't matter.

Put the pieces in a pan, cover with water and put them on the hob to boil, reducing to a simmer until they are cooked, but still firm (test with fork periodically).

If you're planning to cook the pie straight after making it, now is the moment to preheat the oven (180C). 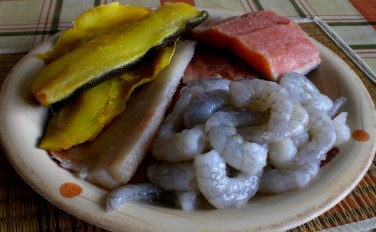 Remove the skin - or in the case of soft fish with leathery skin (as with the salmon), lay it flat and cut or tear chunks of fish away from the skin. 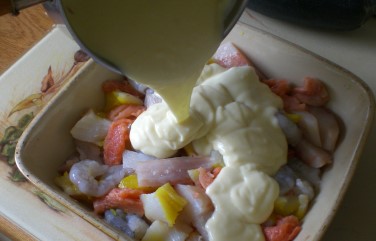 Pour over the sauce, then stir it into the fish pieces to coat them.

There's no need to be too neat and tidy here, but aim to mix up the the different fish pieces reasonably evenly. 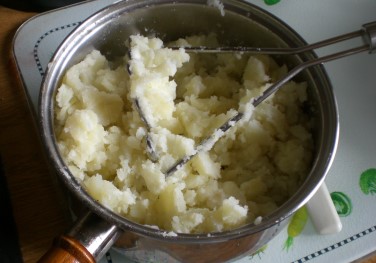 By now, the potatoes should be cooked - drain them thoroughly and let them stand for a while to allow some steam to escape (and they will dry a little).

Mash them coarsely or just break them up with a table knife - lumps are desirable here - certainly don't blend them to a smooth consistency, or the pie will end up sloppy. 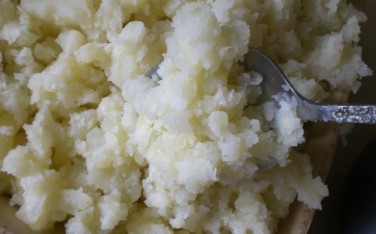 Gently spoon the mashed potatoes evenly on top of the fish.

If you just tip them on in a heap, they will be difficult to spread out without disturbing the filling.

My preference here is not to press down the potato at all, but to keep it open and crumbly. 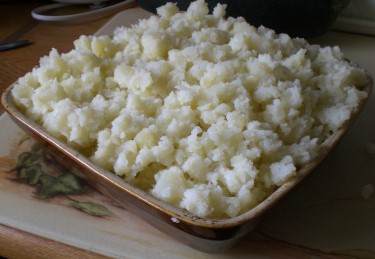 All done and ready to go.

Bake the pie in the oven for half an hour.

Alternatively, the pie can be chilled for cooking later (see the notes below).

Those crumbly potato pieces on top will brown at their peaks - this can be enhanced by a little bit of grated cheese added five or ten minutes before the end of cooking. 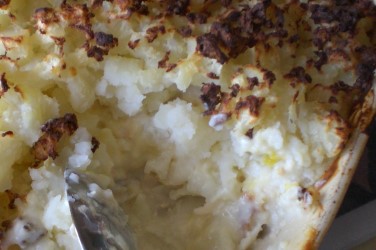 After half an hour, the pie is crisped on top and bubbling at the edges.

The fish inside has cooked in the sauce and in its own juices and is perfectly moist and tender.

The dish tends to mix into itself as it cooks - so the potato thickens the sauce and enrobes the fish - this doesn't make for very interesting product photographs, but it does make it a very comforting and tasty meal.

I used jumbo prawns, smoked haddock, wild pink salmon and pollock for this fish pie, but you can use any kind of fish you like - including drained canned tuna chunks crayfish tails, scallops - anything you like.

Alternatively, you could add whole hard boiled eggs to the filling (this works exceptionally well with smoked fish).

Some of the fish I used here was quite salty, so I didn't add any salt to the sauce, or to the potatoes while cooking them - if you're using freshwater or mild tasting fish, you might need to season the pie to taste.

Large prawns might need de-veining - this means removing the digestive tract - if you can see a dark vein along the tail, slice along it with a sharp knife - it will pull out more or less intact and can be removed and washed away under running water.

There are three approaches to making this pie:

Make fresh and cook immediately
-That's the method described in the main article - make the sauce, prepare the sauce and cook the potatoes, assemble, bake, serve.

Make in advance and chill
-Follow the same method, but allow the sauce and potatoes to cool completely before assembling (otherwise, the warmth will start to cook the fish). Chill the dish in the fridge and cook later.

Make in advance and freeze
-As above, but be sure to use fish that has not previously been frozen - also, it will help to use a deeper dish, so that wrapping it for the freezer won't flatten the potatoes.

Thaw the frozen pie overnight in the fridge before cooking

I used saffron in the sauce for this pie - tarragon has a good affinity with fish, so that would also work. If you like spicy food, a little finely shredded chilli would be good.

Adding snipped chives or thinly sliced spring onion to the mash would be great.

Sauce From A Packet?

It's possible to make this dish using sauce from a packet, but I don't recommend it - some packet sauces are prone to splitting - and you could end up with a fish pie that is watery with unpleasant chunks of curdled sauce.

If you really need to shortcut this step, a jar of sauce intended for Lasagne may be better, as this will hopefully be designed to stand baking without splitting.

However, making a proper béchamel sauce from ingredients, although it may seem a scary idea, is in fact very easy - and the ingredients are cheap and common to nearly every kitchen - it's something well worth taking the (small amount of) effort and practice to master, just because it's so useful.