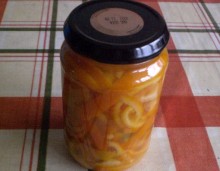 I bought myself a lovely little Italian citrus squeezer for a bargain price in a charity shop.

It's a sturdy, solid little gadget - a thing of beauty - probably intended for lemons, but works very well with limes and small oranges too.

But what to do with all the leftover rinds? 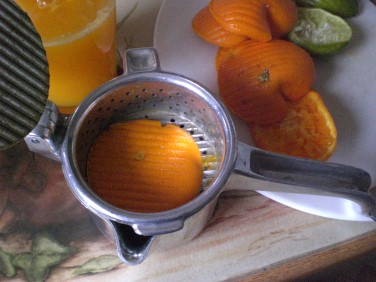 It crushes a halved citrus fruit completely flat against a strong ridged strainer, extracting more of the juice than could ever be squeezed out with a conventional lemon juicer. 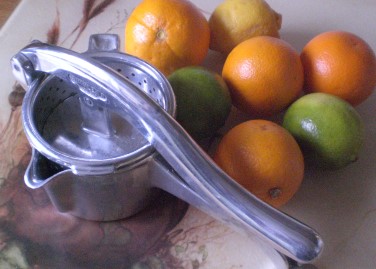 Shopping around, I can get oranges cheap enough that it's economical to juice them myself - and it's much nicer than all but the most expensive ready-squeezed juice I can get at the supermarket. 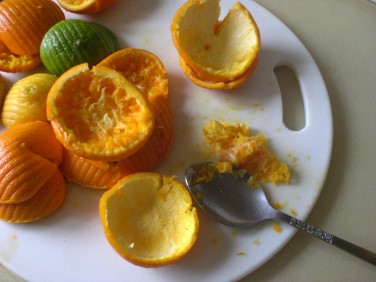 I thought I'd have a try at preserving some of the citrus peel in syrup - this can be used later as an ingredient in cakes, shredded finely as a garnish for ice cream, added to cocktails or mulled wine, and probably a load of other ways too.

I started by scraping off the remains of the pulp and segment membranes from the inside of the rinds. 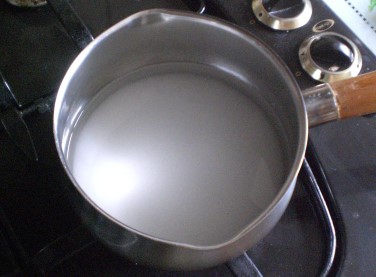 Depending on the amount of citrus peels you're aiming to preserve, you may need more syrup than this, but it's easy to just scale up and make more. 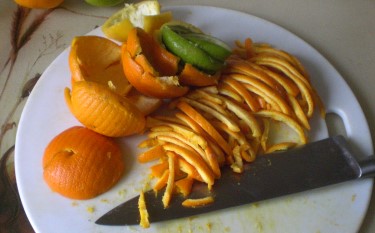 I sliced the rinds into thin strips with a sharp knife - about 3mm thick.

I placed all of these in my small slow-cooker. 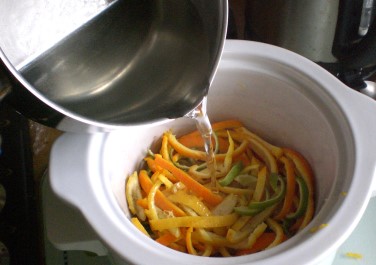 I poured over the syrup - there was just enough to cover the sliced rinds.

The lid went back on and the rinds took three hours to cook, simmering away on the high setting of the slow cooker. 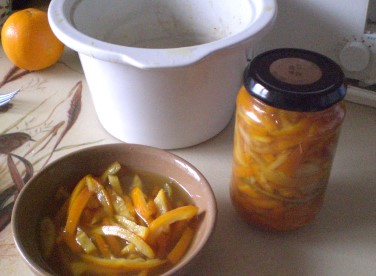 At the end of this time, the pieces of rind had turned translucent and were soft enough to cut with a spoon.

I transferred the preserve into a sterilised jar and topped up with the syrup, which was now quite thick, golden yellow in colour and deliciously zesty.

There was a small amount left over - which I set aside and will use up quickly - the jar was sealed hot though, so should keep pretty much indefinitely.

Here's the end result - preserved citrus peel - looking a lot like a jar of marmalade, only it's all peel - so this isn't for spreading on buttered toast. 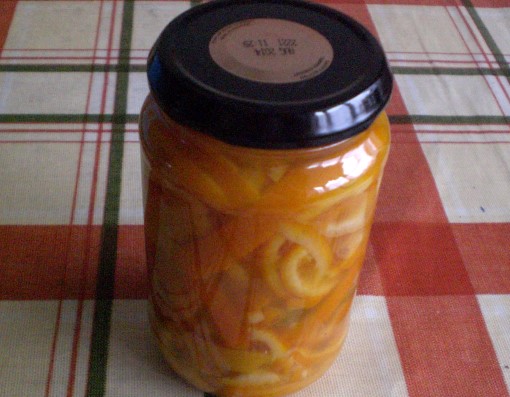 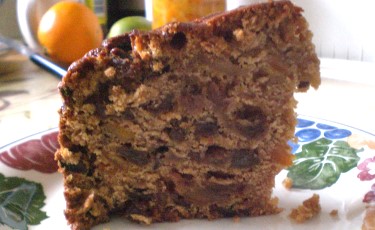 The next day, I used about half of the peel in a cake - a variation on the boil-bake fruitcake here - but replacing half of the dried fruit with peel.

It's delicious - very orangey and zesty, but not overpowering - well worthwhile.

What a great idea! I had put off using citrus peel as candying was too much of a pain in the 'A' but this looks like an excellent way to preserve peel for later and you could make a mix of peel as well. I wonder if you could freeze the peel till you ha