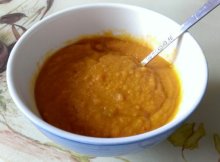 What we're going to do here is cook a big batch of different vegetables, keeping them in manageable pieces - then freeze them so that they can be later treated as a pick-and-mix assortment, from which a variety of different soups can be assembled. 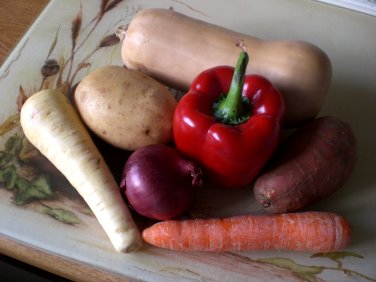 The basis of my Pick And Mix soup will be a selection of vegetables that are great for roasting - butternut squash, potatoes, parsnips, red pepper, sweet potatoes, red onions and carrots,

But wait... Where's the recipe?

Well, there isn't one. Or rather - and a bit unusually - the recipe comes after all of the cooking.

That's how we're going to achieve huge variety of flavours and styles, from only a single session in the kitchen - the ingredients will all be cooked, chilled or frozen, then assembled into recipes for soup in their cold state - no further cooking required until they are reheated in individual portions. 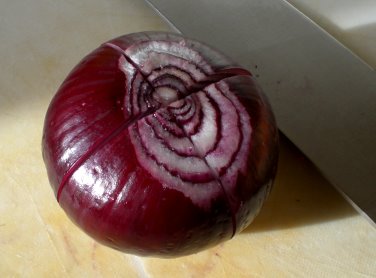 So - one or two tricks - the onions are peeled whole and given only a cross-cut in their tops - not cutting all the way through - this way, they will be able to be separated into quarters once cooked - and won't decompose into burnt, worthless little shards of carbon during the roasting.

Similarly, all of the other ingredients will be cut up into fairly large chunks, for ease of handling later.

When preparing vegetables for roasting and serving in intact pieces, it's normal to parboil some of them; potatoes will have a nicer surface texture, for example, and parsnips will tend to be more moist and delicate if they are cooked in boiling water for a few minutes before roasting.

However, these roasted vegetables will be blended or cut into small pieces, so parboiling isn't necessary. 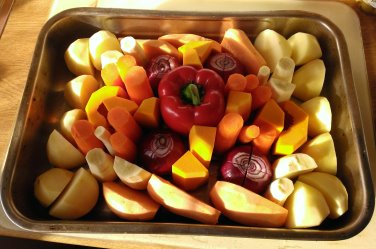 A little oil in the bottom of the roasting pan helps to stop anything sticking too badly - and (especially as there's no parboiling), it's worth peeling and cutting the potatoes and sweet potatoes last of all - they tend to blacken a little once peeled and exposed to the air - so we peel them last, then get the tin straight into the preheated oven.

Start with the tin covered with a single layer of foil, cook at 150C for 45 minutes - this allows the vegetables to cook in their own steam - then remove the foil and continue cooking until done - uncovering them allows them to develop crisped edges, which adds flavour. 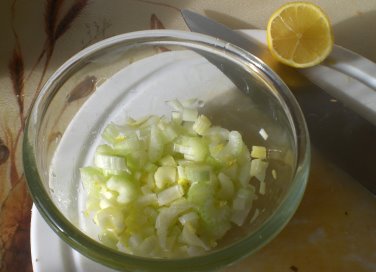 While the main batch of vegetables is cooking, there's time to prepare a few small batches of other ingredients - these will be used to add flavour and texture accents to the soups.

This one is just a couple of sticks of celery - cut into small chunks, dressed with lemon juice, a little olive oil and a small pinch of salt - cooked in the microwave for just a couple of minutes to tenderise. 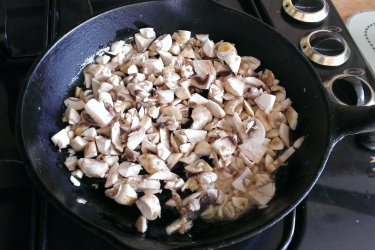 Next - a few mushrooms, chopped finely, then gently simmered in butter until soft and juicy. 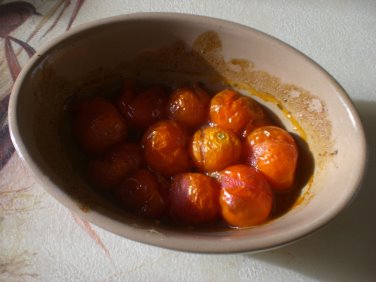 And a handful of cherry tomatoes - dressed with a splash of olive oil and some mixed dried herbs - then into the oven alongside the roasting pan, but only for about half an hour, until they burst and cook through.

Once cooked and cooled, they can be picked up by their skins and the cooked flesh will drop out more or less intact - the skin can be discarded. 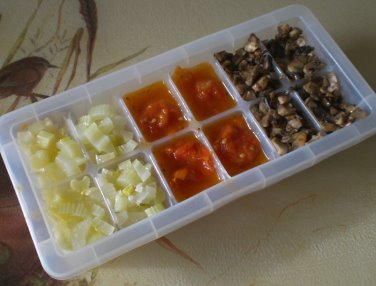 These additional ingredients can be frozen in an ice cube tray, as they will be added in small amounts. 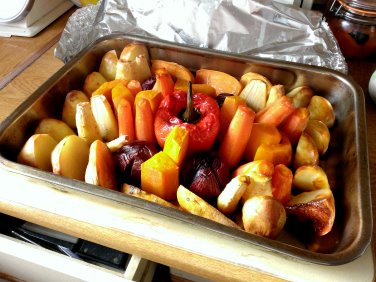 When the roast vegetables are fully cooked (this can be tested by poking them with a knife), just leave the uncovered to cool completely. 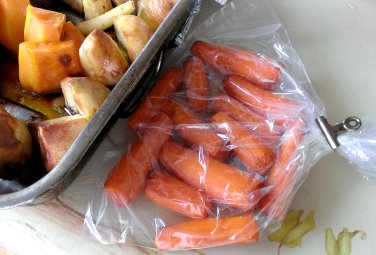 After the vegetables are fully cooled, they can be bagged for freezing.

Arranging them in a single layer of one type of vegetable in each bag, then sucking out the air before sealing, allows them to be frozen in separate pieces.

This is key to the Pick And Mix idea - different amounts of each ingredient will be able to be easily picked out and thawed in small, variously-mixed batches. 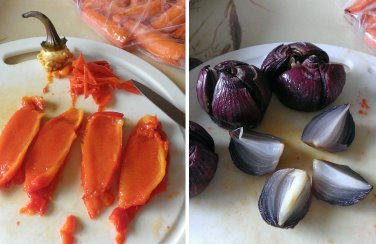 Similarly with the red pepper and the onions - they can be cut into manageable pieces and frozen in bags in such way to keep them from sticking to one another as they freeze.

Onions are perhaps the most important ingredient - most soup recipes include them (and for good reason - even as a minor ingredient, they add sweetness and robust flavour. 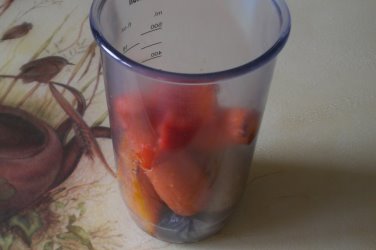 Now it's time to get creative! Dozens of different basic combinations are possible using the prepared ingredients - and even more variety is possible by means of what comes next.

So the plan is (starting the night before the soup is required): remove a mixed choice of vegetables from the freezer and place them in a container in the fridge - they will thaw overnight.

The next morning, they can be blended, cold, with water or stock and seasonings.

Further variety - this time, of texture - is possible by reserving some of the vegetables whole and chopping them into small chunks to be added to the soup after the other ingredients are blended.

(At the foot of this page, there are some combination ideas to get you started). 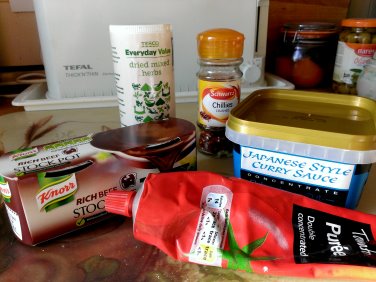 The assembly of the soup will require some additional seasoning or fortification - if you make your own chicken stock, this can be used, or part of a stock cube can be added - or curry paste, tomato puree - any number of possibilities exist.

Or, if you want to just bring out the subtle flavours of the vegetables, you could just add water and a little salt. 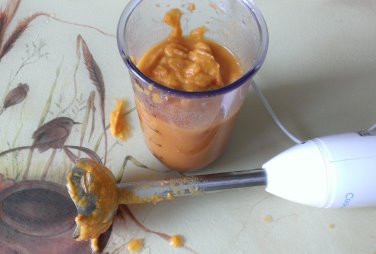 A handheld blender is ideal for this purpose - making it really easy to blend up a small, single-portion amount of soup.

In this case, the selection was carrots, a piece of butternut squash and red pepper, seasoned with a heaped teaspoonful of Japanese curry paste, blended smooth with just enough water to make a hearty, thick soup.

Two or three minutes in the microwave (stopping halfway to stir) is sufficient to warm it back up into piping hot and delicious meal. 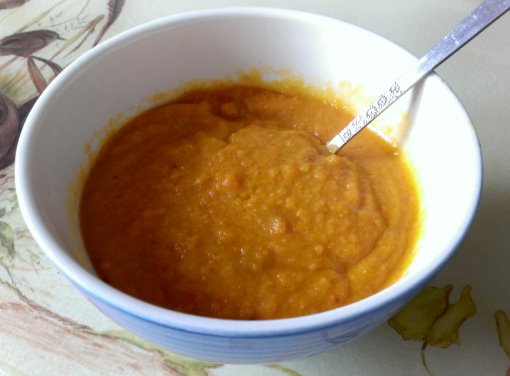 Here's a definitely non-exhaustive list of ideas for soup recipes using these ingredients (read on for other ideas on how to add even more variety).

Spicy Root Vegetables - Potato, parsnip, carrot and onion. Blend to a smooth texture with water and a spoonful of curry paste. After blending, stir in a pinch of chilli flakes.

Creamy Potato And Mushroom - Potatoes, onion, celery and mushrooms. Blend the potatoes with milk, along with the celery and onion. After blending, stir in the mushrooms and season with a pinch of salt and white pepper (if in doubt, underseason - more salt can be added when the soup is served).

Sweet Potato, Butternut And Pepper - These three vegetables, plus chicken stock (or water and a piece of chicken stock cube) - blend to a smooth texture,

Mixed Vegetable Broth - Onion, carrot, potato, parsnip, celery. Cut all the vegetables into small pieces and mix with water, herbs and a heaped teaspoon of instant gravy granules (these will thicken into a broth when the soup is reheated).

Of course, you're not limited to the selection of vegetables I've used here - and not limited to roasting them either - asparagus, celeriac or golden beetroot are just some of the possibilities. 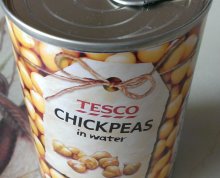 Half a can of chick peas (garbanzo beans) could be used along with tomatoes, pepper, butternut and chilli flakes, seasoned with cumin to make a Mexican-inspired soup. Later in the week, the other half of the chick peas could be blended with onions, potato and curry paste to make an Indian dahl-type soup.

Ready-frozen vegetables are also useful - peas can be added whole or blended - frozen cauliflower florets will not require any cooking if just thawed and blended along with other ingredients - sliced green beans would be a good addition to the Italian-style soup idea (detailed above). Frozen sweetcorn is also handy.

Very small pasta shapes - such as stars (stellini) or bows (farfalline) should not require pre-cooking - if these are added to the soup during preparation in the morning, they will soak up enough moisture by lunchtime that they will only need warming up when the soup is heated to serve.

Likewise, a few pieces of ramen noodle can be broken up and added - they will soak and be perfectly soft and cooked when the soup is reheated.

Leftovers and set-aside portions from midweek meals can also contribute to the variety - a few bits of cooked chicken or a spoonful of baked beans, for example.

Have a rummage through your cupboards and ask yourself what else you could add to your soups for flavour - sauces or condiments such as ketchups, relishes, mustard or chutneys; soy sauce; different spices and herbs; peanut butter... and so on.

YUM! what a great idea! Perfect for those late nights home when I don't want to be in the kitchen all night;