What are Hedgehog Mushrooms?

Hydnum repandum - a highly-regarded edible mushroom that grows in loose groups in deciduous or coniferous woodland (I found it in mixed deciduous forest, in association with beech and possibly holly)

The fungus is characterised by the unusual structure of its underside - where many other mushrooms have gills, this species has densely-clustered spines - hence the name 'Hedgehog'.

The cap of this fungus is typically bright, creamy-white in colour - which makes them quite easy to spot from a distance in open woodland - the first time I gathered this mushroom, I was aided in identifying it by a kindly stranger (who was very familiar with the species) - who described the appearance as 'like a handful of whipped cream thrown on the ground'.

This is an apt description - especially in describing the more mature specimens - younger ones are often quite regular mushroom-shaped, but as they grow, they tend to become wavy, scalloped and quite irregular.  They may reach a size of 25cm or more in diameter.

In younger specimens, the cap may be yellowish-tan in colour to the extent that the mushrooms almost resemble Chanterelles.

All parts of this mushroom will tend to stain yellow-brown if cut or bruised (this is normal - and is also one of the identifying characteristics of the species).

Let's take a closer look at those spines - they're the key identifying characteristic of this fungus.

They are tightly-packed conical spikes - shorter toward the edge of the cap.  They are quite fragile and fall off if they are brushed or if the mushroom is roughly handled.

The fruiting body of this fungus is quite delicate and will break apart if handled roughly - the stem may also be quite short and the clustered spines below are very prone to picking up dirt and debris - I recommend the use of a sharp knife - carefully cut the stem where it grows, trim off any parts that still have loose debris on them and place the mushrooms in a flat basket with the spines downwards. 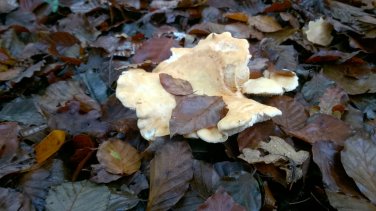 This is quite a slow-growing fungus, and you may well find them in all stages of maturity - the best ones to pick are neither the smallest nor the largest specimens.  Small ones tend to be thin and fragile, lacking substantial flesh - very large ones may be significantly eaten away by slugs and beginning to decay.

A little care is needed in the preparation of this fungus - even if the greatest care has been taken during gathering, there will probably still be small pieces of dirt, leaf-litter and small invertebrate life nestled in amongst the spines.

Wipe off any dirt from the top of the cap with a piece of kitchen tissue; cut into pieces with a sharp knife, then use the point of a small knife to flick out any dirt from amongst the spines

It is said that larger specimens may be bitter and require blanching in hot water - although other informations sources say this is not so.  I find it best to blanch them anyway, because it softens the spines and prevents them all falling off when the pieces are added to the pan.  I just cut up the mushrooms into thumb-sized pieces, put them in a bowl and poured on boiling water.  I left them for a couple of minutes, then drained them.

This is a meaty, substantial mushroom with a great flavour, so it stands up well against other ingredients - I fried off some lardons of streaky bacon with finely-chopped shallot - once this was cooked, I added the pieces of blanched mushroom, a knob of butter, a small sprinkle of chopped herbs and a couple of grinds of black pepper.

I fried this gently for a few minutes - the mushrooms released some juices as they cooked, which reduced down to a sort of sticky glaze.  At this point, I turned the heat right up, added a couple of tablspoons of brandy and flamed off the alcohol, then I added a splash of cream and some grated mature cheddar and stirred it all together to make a creamy sauce.

While this was all happening, I had made a large, thin omelette - I tipped the creamy mushroom mix onto one half of the omelette and folded it over.  I served my creamy wild mushroom omelette with sliced potatoes, baked crisp in the oven, and tender green peas.  Supremely tasty and satisfying!

Many other sorts of mushrooms would have been lost in amongst the onion, bacon, cheese, herbs and cream, but not this one.  It has a robust and deep wild-mushroom flavour that is very nicely balanced in this serving method.